Amphibians are animals that can live both on land and in water. Amphibians can include: 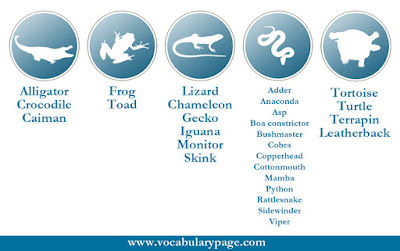 an amphibian with moist skin that uses its long hind legs to leap. Young form of a frog or toad is called a tadpole.

a small amphibian that is similar to a lizard

an amphibian with dry skin that is similar to frog

Difference between frog and toad

Reptiles are cold-blooded animals that lay eggs. Reptiles can include:

a type of crocodile with a very large jaw, that lives only in the United States and Chine

a large reptile with a thick skin that lives in fresh water, lakes or river  in hot countries.

Difference between alligator and crocodile

Snakes are long thin reptiles with no legs. Snakes can include:

a small poisonous snake that is found Europe

a small poisonous snake that is found in Africa, Europe and Asia. Asp was a symbol of royalty in Egypt.

a large non-venomous South America snake that uses its strong body to squeeze its victim to death. They are not as long as anacondas.

a poisonous brownish snake that is found in North America

a poisonous snake that spend much of its time in water. It is also called a black water viper.

a black or green poisonous snake that is found in Africa

a viper that has a heat sensing pit on its head

a large snake that kills its victim by squeezing it

a synonym for snake, especially a large one

a poisonous desert snake that lives in North America and moves sideways along the ground. It is also called a horned rattlesnake.

Lizards are reptiles with four short legs and a long tail. Small lizards lose their tails in danger. Lizards can include:

a lizard that has ability to change skin colours

a small lizard without eyelids that live in hot countries

the largest lizard that is found in Indonesia

a large lizard that is found in Australia, Africa and Asia. The largest species of monitor is Komodo dragon.

a lizard that has no legs

a reptile with a hard, bony shell that lives on land

a reptile with a hard, bony shell that lives in the water

a small turtle that lives in warm water

a large sea turtle without a hard, bony shell.