A verbal noun is a noun formed from a verb but acting as a noun; it can take the plural form, it can be modified by adjectives. In English, verbal nouns are usually formed by adding a suffix to the end of the verb. For example: 'Protect' is the base form of the verb, but you can make a noun from it by adding the suffix -ion (Protection). 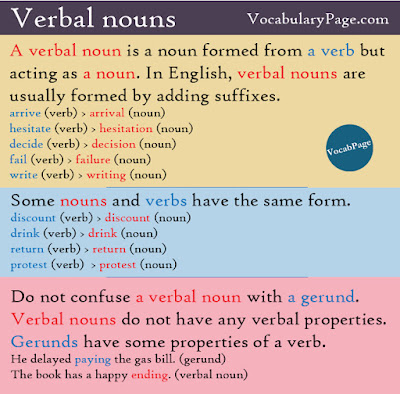 Be careful to spell the new words correctly.

Do not confuse a verbal noun with a gerund. Both gerunds and verbal nouns are directly derived from verbs. However, verbal nouns do not have any verbal properties. Gerunds have some properties of a verb, for example, they can take a direct object.