Used to vr. be used to

A lot of people get confused about the difference between 'used to do' and 'be used to doing'. 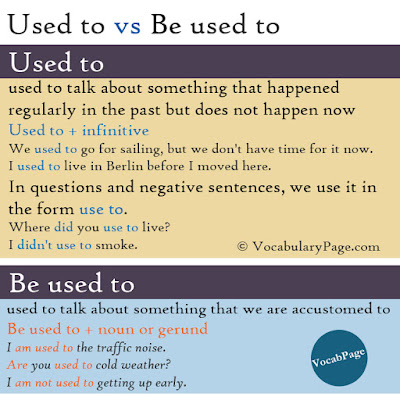 Used to do something

Be used to (doing) something

We use 'used to do something' to talk about something that happened regularly in the past but does not happen now. 'Used to' is followed by an infinitive. Note that 'used to' has no present form.
We use to go for sailing...

In questions and negative sentences, we use it in the form use to.

We can use 'would' instead of 'used to' when we are talking about things that often or always happened in the past.

We don't use 'would' to talk about facts or states in the past.
I would live in Berlin.

We use 'be used to something' to talk about something that we are accustomed to. The expression be used to can be used in any tense with any pronoun. It is followed by a noun or a gerund.

We can also use the expression get used to.