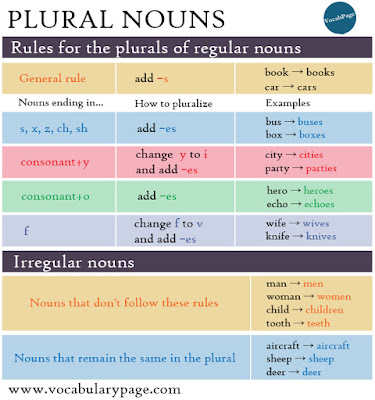 A plural noun is a word that refers to more than one person or thing. To make the plural of a noun, we add the plural ending –s.  For example, ‘book’ in the plural is ‘books’.

That seems easy, but there are a lot of exceptions to this rule.

Nouns ending in f make the plural by changing f to –ves. In this case, es is pronounced as /z/.

The plurals of the following nouns are formed by adding –s.

If the noun ends in o, add –es to form the plural.

Pronunciation of –s (-es) changes depending on what sound the singular noun ends in.  There are three kinds of pronunciation: /s/, /z/, /iz/.

These are rules for the plurals of regular nouns.

Some nouns remain the same in the plural.We do not add –s or –es to make them plural.

We identify them as singular or plural by looking at the context.

Nouns that are always plural
In English, some nouns are used only in the plural. They are often things that consist of two parts joined together. They cannot be used with singular verbs.

We can use the expression a pair of to refer to the exact number of these nouns, for example, a pair of trousers, two pairs of jeans.

Nouns that are always singular

Some nouns have no plurals, although they end in –s.
Plural Nouns - Quiz 1