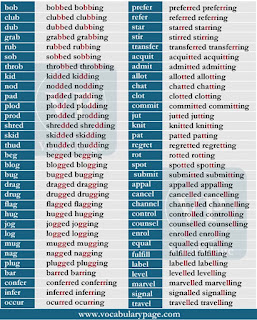 When a regular verb ends with a vowel plus a consonant, and the final syllable is stressed, the verb doubles the last consonant before adding -ed   and –ing.

Here is the list of verbs that double the last consonants before adding –ed and –ing.

Bob: to move repeatedly up and down on the surface of water


Club: to hit very hard with something heavy


Dub: to give a name or title to someone, usually by the media


Grab: to suddenly take and hold someone by a part of their body


Rub: to press and move your hand or cloth firmly and repeatedly over something


Throb: to feel a pain in a regular repeated pattern in a part of your body

Kid: to tell something that is not serious as a joke


Nod: to move your head up and down


Pad: to put a soft substance in or on something to protect it from damage or change its shape


Plod: to walk taking slow heavy steps because it is difficult to walk


Prod: to push your finger or a pointed object into someone


Shred: cut into thin pieces (of food) or particles (of paper)


Skid: to lose control and begin to slide


Thud: to fall or hit something in a way that makes a low, dull sound

Beg: to ask for something pleadingly


Blog: to write about your experiences and interest in a blog


Bug: to hide a small listening device somewhere for eavesdropping


Drag: to pull something heavy along the ground


Drug: to give a person or animal a chemical that has physical and mental effects


Flag: to mark something to make it noticeable


Hug: to hold someone with your arms to show love or friendship


Jog: to run at slow and leisurely speed for exercise


Mug: to attack and rob someone in a street


Nag: to annoy someone by complaining about something in a repeated way


Plug: to cover or fill a small hole with something that is suitable to it

Bar: to not allow to do something or to enter somewhere; to close with bars


Confer: to discuss something with someone or in a group before making a decision


Infer: to form a conclusion based on the facts you know


Refer: to mention or write about someone/something


Star: to be in the leading role in a play, movie, etc.


Stir: to mix a substance thoroughly in a container by moving a spoon or stick


Transfer: to move from one place to another


Acquit: to state in court that someone is innocent of a crime

Admit: to reluctantly say that you accept something


Allot: to give a particular share of something to use


Chat: to talk in a friendly way to someone


Commit: to do something that is not allowed


Jut: to stick out further than a place or surface


Knit: to make clothes out of wool or cotton thread with knitting needles


Pat: to stroke as a way of showing affection


Regret: to feel sorry about something that you have or have not done


Submit: to give something to someone who is authorized to make a decision about it


Cancel: to say that something that was planned will not happen


Channel: to direct or send something

Control: to have authority to make decisions about something


Counsel: to provide expert advice for someone


Enrol (British English): to put your name on the list of participants in something
Enroll (American English)


Equal: to be the same in number as another

Fulfil (British English): to achieve something that is required or wished


Label: to attach a label onto an object


Level: to make flat or destroy something


Signal: to give a message or information by making a sound or movement


Travel: to make a journey