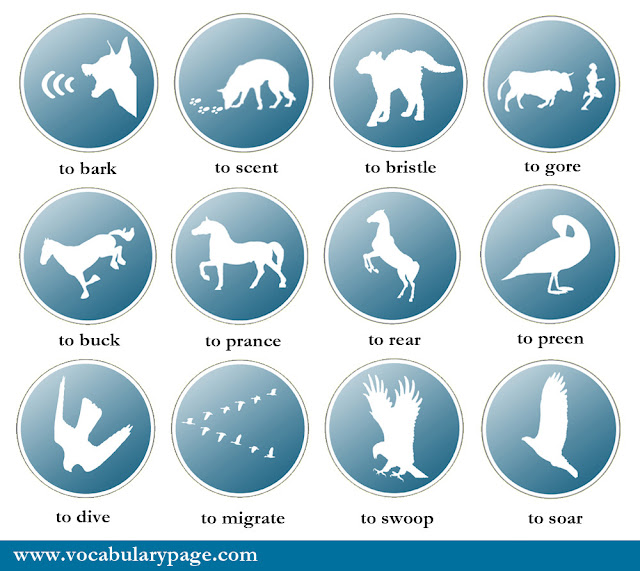 (of an elephant) to walk slowly:

(of a dog) to make a short harsh noise:

to cut into with the teeth or to make a small hole in the skin:

to raise the fur on the body:

(of a horse) to kick off with the hind legs:

(of a snake) to slide out of the outer layer of old skin:

to use claw or nails to scratch:
Coil up (S)
(of a snake) to wrap into a series of circles:

(of a bird) to go down quickly and suddenly while flying:

1. to fly lightly and quickly:
2. to move wings quickly up and down without flying:

(of a young animal) to move and jump in a playful way:

(of a horse) to run very fast:

(of a bird) to fly smoothly without moving wings:

to attack and injure someone with horns:

(of a dog) to make a low threatening sound as a warning:

to produce a long ‘s’ sound:

(of insects or pests) to exist in large numbers:

to drink with the tongue

to travel to warmer places:

(US Molt) to renew feather, hair or skin:

to spend the winter season in a place; to remain alive during the winter:

to touch many times with a paw:

(of a horse) to move with high, quick steps in a particular direction:

to clean and groom its feathers with its beak:

(of a horse) to rise up on the hind legs with the forelegs in the air:

to find or track something by using sensitive nose:

to remove a layer of old skin:

(of a bird) to fly downwards suddenly in order to snatch something without landing:

to rise high in the sky while flying:
See also:
Animal homes