How to use but as a conjunction 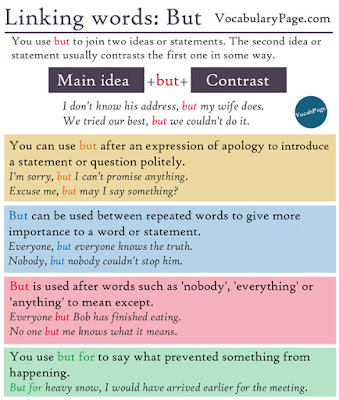 But is a coordinating conjunction. You use but to join two ideas or statements. The second idea or statement usually contrasts the first one in some way.

You can use but after an expression of apology to introduce a statement or question politely.

But can be used between repeated words to give more importance to a word or statement.

But is used after words such as 'nobody', 'everything' or 'anything' to mean except.

In spoken English you can start a  sentence with but to express surprise, shock, annoyance, etc.

You use but for to say what prevented something from happening.

Only can be used as an adverb to mean only.