Idioms with parts of animals

Idioms with parts of animals 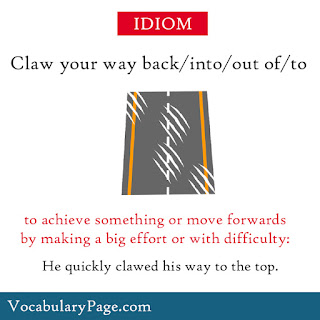 informal.to go on foot because transportation is unavailable

to make someone angry

Be on horns of a dilemma

having to make a choice between two equally important alternatives

Draw in your horns

to behave carefully in order to spend less money than before

informal. to get upset.

Be over the hump

informal. to past the hardest part of something

Get your snout in the trough

when you get your snout in the trough, it means you try or hurry to get a lot of money.

to turn around and flee from danger

Be on someone’s tail

to drive after someone

Can’t make head nor tail of

to not understand at all

to work hard to do something but achieve very little

Be the cat’s whiskers

informal. to be superior person.

narrowly; by a slight amount

Come out of your shell

Birds of a feather

A feather in your cap

a great achievement; success to be proud of

to restrain someone from acting freely

Wait in the wings

to be ready to replace someone: ready to be active

to feel more confident to try something new

Take under your wing

to take care of someone

to begin to fly