Dictionaries and thesauri are reference books for words. The best way to understand the difference between dictionary and thesaurus is clarifying the terms individually.


What is a Dictionary?

A dictionary contains a list of words in alphabetical order, together with their definitions, pronunciations, etymologies or spellings.
definition: a statement that explains the meaning of the word in the dictionary
pronunciation: a way in which the word is pronounced
Etymology: the origin and history of the word and its meaning
spelling: the correct way of forming the word

Here is an example of a dictionary entry for the noun 'money':

money (noun): what you earn and use to pay for things

If you don't know the meaning or correct spelling of a word, look it up in the dictionary.

What is a Thesaurus?

A thesaurus contains a list of words in alphabetical order, that are similar in meaning (synonyms).
A thesaurus can include the opposite of a word.

Here is an example of a thesaurus entry for the noun 'money':

While a dictionary gives the meaning of a word, a thesaurus gives a list of words that have similar
meanings for each entry. 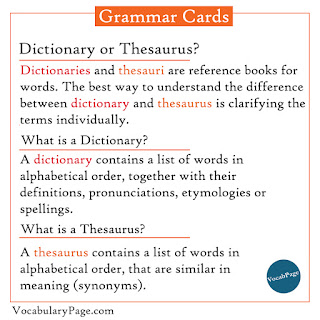