You can use the verbs close and shut to mean the same thing, but shut is less formal than close. Shut is an irregular verb. Its past tense and past participle forms are the same as the present tense.


Most of the time, close and shut are interchangeable.


We can use close or shut to mean to stop being open for business.


However, in a few cases, we have to choose one or the other.
When we are talking about ending a discussion, activity, or event, we always use close.


Close, but not shut, is used to talk about making the distance or difference smaller.

Closed and shut are adjectives and mean not open. The adjective shut cannot go before a noun.

As an adjective close means near in space or time. For example, our house is close to the beach. 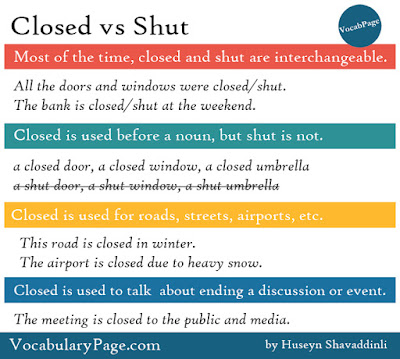