The words altar and alter often confuse students because they are homophones.These words have the same pronunciation even though they are different parts of speech. Altar (with an A) is a noun. Alter (with an E) is a verb.

Altar and alter  are spelled differently

The noun altar means a holy table or surface in a religious building. The main altar in a church is called the high altar.


The word altar also is the part of the following idiom.

on the altar of

Meaning: in order to achieve something

The verb alter means to change something.


As an adjective, alter can be the part of the following phrase

Meaning: the other side of someone’s personality 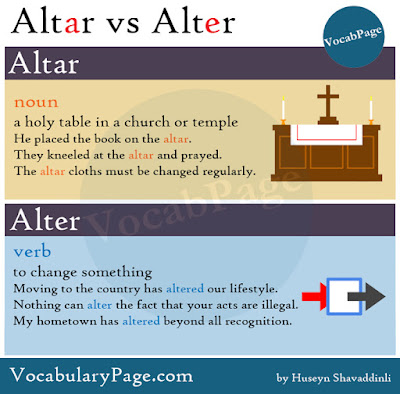