Envelop and envelope  are easily confused in the English language. They sound similar but their meanings are different. One is a verb and the other is a noun. These two words are never interchangeable. 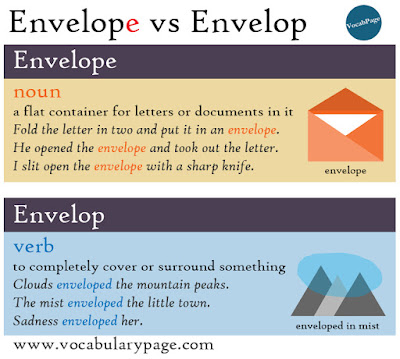 Envelope /ˈenvələʊp/  is a noun meaning a flat container, made of paper, for letters or documents in it. Envelope is spelled with an e on the end. We stress the first syllable in 'EN-ve-lope'.

Envelop /ɪnˈveləp/ is only a verb. It means to completely cover or surround someone or something. We stress the second syllable in 'en-VE-lop