Lots of people are mixing up device and devise. These two words  look similar, but they have different pronunciations and meanings. 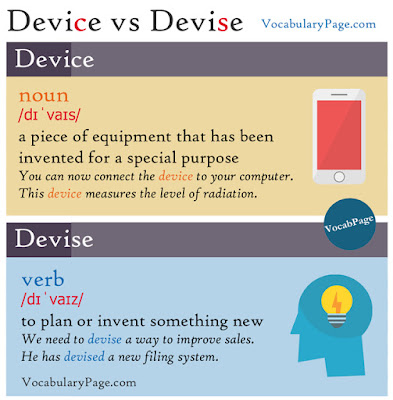 It is spelt with a 'c'
Device /dɪˈvaɪs/ is a countable noun and means a piece of equipment that has been invented for a special purpose. Tablet PCs and mobile phones are our devices.
A bomb or other explosive weapon can be called a device.
Device also means a plan or method that is used to achieve something.

It is spelt with an 's'
Devise /dɪˈvaɪz/ is most often used as a verb to mean to plan or invent something new.
Devise can also be used as a noun to mean a gift or real property given to someone in a will.