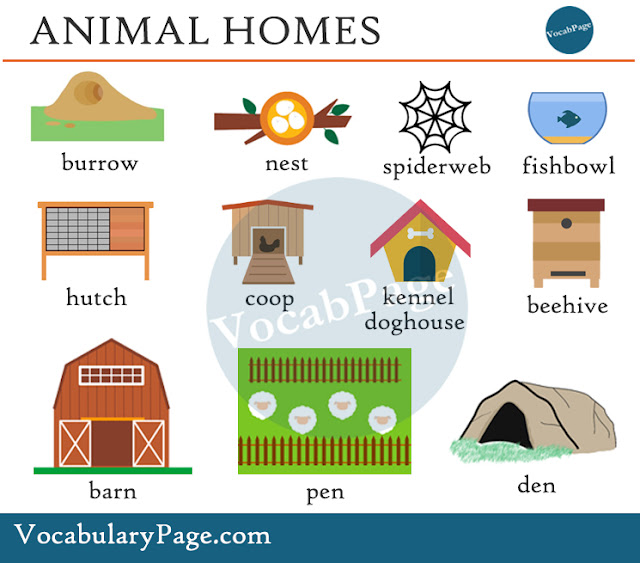 a large cage for keeping birds in which the birds can fly. Aviary is also known as a flight cage.

a large building used for housing livestock and for storing crops:

a hole or tunnel in the ground that an animal (such as a rabbit or mole) digs for habitation:

a structure made of bars, wires or mesh, used for housing animals or bird:

a small building for chickens:

shelter of some types of wild animals (such as a lion and bear), liar:

the home of a tree squirrel:

a water-filled glass container in which water plants or animals are kept:

a container in which bees are kept:

a wooden box with a wire front, for keeping small animals in, especially rabbits:

a small shelter for dogs:

a hidden place where wild animals live or sleep:

a den of a beaver:

a shelter built by birds to lay their egg and protect their young from predators:

a large aquarium in which sea creatures are displayed to the public:

a place such as a branch or a perch where birds sleep:

a den of a badger:

a net created by a spider to trap insects:

a place in which wild animals are displayed to the public: