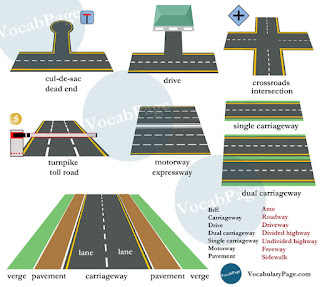 Road is a flat, hard surface built for vehicles or people to travel on. Roads can include streets, highways or trails.

Streets are public roads in cities or towns. Streets can include:

Highways are public roads that connect cities. Highways can include:

Trails are roads, usually unpaved, through a countryside, forest, field etc. Trails can include:

Parts of a road

A road can consist of carriageway (US roadway), lanes, pavement (US sidewalk), crossroads, and median strip.