As you know, adjectives and nouns are different parts of speech. A noun is a word that refers to a person, animal, thing, or idea, and an adjective describes a noun. For example, in the phrase 'a clever boy', 'clever' is an adjective, and 'boy' is a noun.
In English, some adjectives can function as nouns. These are adjectival nouns.
Let’s look at the following examples:


'The rich', 'the famous', 'the poor', and 'the elderly' are adjectives used as nouns. These expressions mean people considered together as a group. For example, the rich means people who are rich.
As you can see, these nouns are always plural and used with the definite article.

Here are some examples of plural adjectival nouns with their definitions: 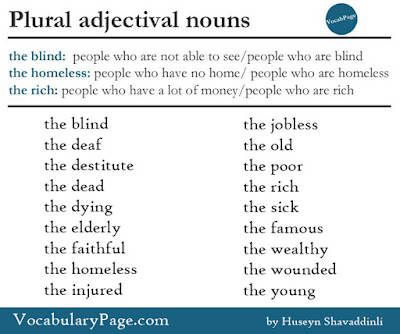