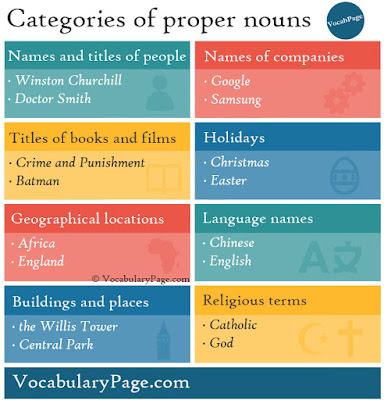 These two categories of nouns are distinct from each other. A common noun is the name of a class of person, place, or thing.
Examples: girl, boy, city, village, table, book
A proper noun is the specific name of a person, place or thing.
Examples: Anna, Paul, Hartford, Old Avon Village
A common noun does not begin with a capital letter unless it is the first word of a sentence. A proper noun always requires capitalization.

I’d asked every student in the class but only David came.
student=common noun, David=proper noun
Raul has been a responsible employee.
Raul=proper noun, employee=common noun
She speaks a language similar to Arabic.
language=common noun, Arabic=proper noun

As a general rule, we don’t use an article with proper nouns. But there are exceptions to this rule.We use the definite article with names of people or places made plural with ‘s’: the Clintons, the United States, the Alps. If a company name contains company, corporation or foundation, we use the: the Ford Motor Company. We use the definite article for names of large regions, oceans or rivers: the Atlantic Ocean, the Mississippi River.