The word fair can be an adjective, adverb, or a noun and has a lot of meanings. As an adjective it means (1) reasonable and acceptable, (2) treating a group of people equally, (3) quite good, (4) not cloudy or stormy, (5) pale, and (6) blonde.


The adverb fair means in a reasonable and honest way or according to the rules.


Fair can also be used as a noun to mean an event at which people or companies sell and show their products.

Fare can be used as a noun or a verb.

the money that you pay to travel by public transportation


a passenger who is traveling  in a taxi

to be successful or unsuccessful in a particular activity 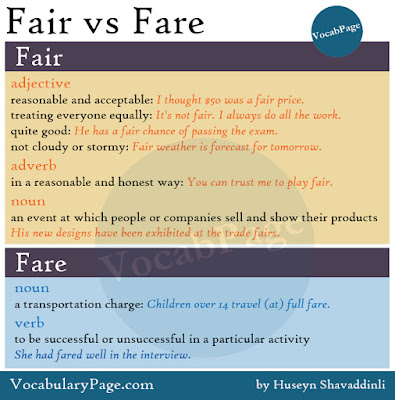