A lot of people often get confused about add and ad. These two words have same pronunciations, but they are spelled differently (add with two D's) and have different meanings. 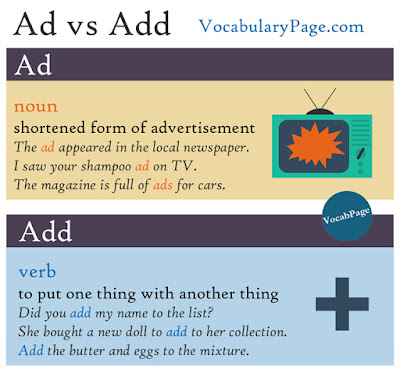 Ad is a noun that means an announcement in a newspaper, on a television, on radio, on the Internet, etc. about a product, job or service.
Ad and advert are the shortened forms of advertisement.

Add is a verb that means  'put something with another thing to increase the amount or number of it'
If you add two or more numbers together, you get their total.
Add also means 'say or write something more'.

Be careful about the abbreviations AD and ADD.