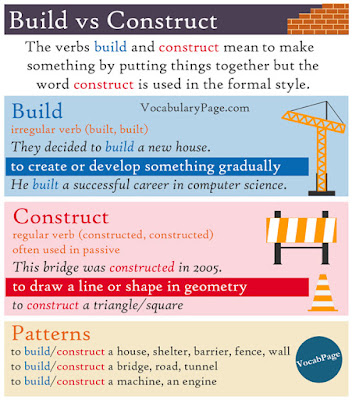 The verbs build and construct mean to make something by putting things together but the word construct is used in the formal style. Build is an irregular verb.  Its past simple and past participle forms are built. Construct is a regular verb and you add -ed to its base form to create the past forms (constructed).

Build and construct are almost interchangeable, as in the following patterns:
Construct is often used in the passive voice.
You use build (also build up) to mean to create or develop something gradually.
In grammar Construct means to form an argument, a sentence, a story, a theory, etc.
In geometry construct means to draw a line or shape